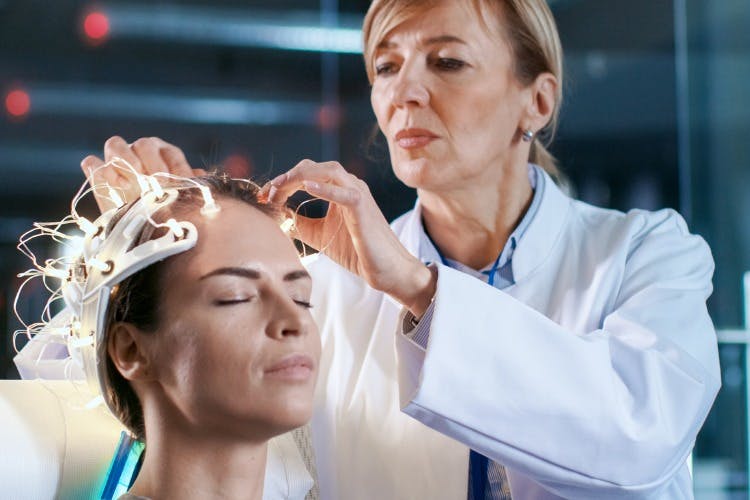 Deep brain stimulation may hold benefits for patients with traumatic brain injury, according to recent studies.

But what is deep brain stimulation, and how does it work? That’s what this article is here to answer.

DBS has proven effective at treating tremors and other neuromuscular issues such as dystonia, which typically accompany Parkinson’s disease.

Since traumatic brain injury shares symptoms in common with Parkinson’s, researchers hope that deep brain stimulation might also benefit TBI patients. The studies, which began in the 1960s, have so far produced mixed results.

So, what does the research on deep brain stimulation say? Some of it is quite promising.

One major double-blind study found that deep brain stimulation improved responsiveness in TBI patients who had been in a minimally conscious state for over six years. These patients would drift in and out of consciousness and could not respond to commands before the study began.

The researchers found that the patients had better responses while their brains were stimulated than when the stimulation was turned off.

This was an important breakthrough because it showed that patients could still make improvements if their brains are stimulated, even after six years of essentially being in a vegetative state.

Another recent study was performed on severe brain injury patients with serious cognitive impairments. They each required 24-hour care and struggled with crippling anxiety, impulsivity, and anger problems.

One patient was so impaired that he would get angry and make inappropriate comments whenever he met a new person, so the family had to keep him under close supervision.

The study lasted for three years, and at the end of the three years, all participants had made significant improvements in their cognitive functions and self-regulation. They were better able to cope and even had decreased fatigue. The man who would make rude comments to others started to control his impulses more and could interact with people normally again.

Not all the research on deep brain stimulation for TBI has been overwhelmingly positive though. There have been several studies where only a few patients saw any benefits; the rest showed no improvements.

In addition, deep brain stimulation is not a risk-free procedure. As with any surgery, there are potential complications such as brain hemorrhaging and infections.

Because it is not FDA approved, it is also quite costly, with no guarantee that it will help. All this should be taken into account before deciding to try deep brain stimulation.

Other Forms of Brain Stimulation

If you are interested in new TBI therapies but are hesitant to undergo surgery, there is another, less invasive form of brain stimulation you can try called transcranial magnetic stimulation (TMS).

With TMS, neurologists hold a magnetic coil over the patient’s scalp. Then, they pass a powerful electric current through the coil, which creates a magnetic field that passes through the skull and stimulates the brain.

While magnetic stimulation does not improve cognition in traumatic brain injury patients, it does trigger the brain’s natural repair mechanism, neuroplasticity.

For neuroplasticity to work, however, you must engage in repetitious exercise. Think of magnetic brain stimulation as a catalyst to get neuroplasticity started. You will still have to do the hard work yourself, but TMS gets the ball rolling.

Should You Try Deep Brain Stimulation for Traumatic Brain Injury?

Deep brain stimulation may help relieve some of the side effects of traumatic brain injury. But because it is an invasive, expensive surgery, we recommend speaking with your doctor first to decide whether the possible benefits outweigh the risks.

Always remember that there is no such thing as a perfect cure for brain injury. Even if you experience incredible results from DBS, you must continue with your cognitive and physical therapy exercises.

That will help ensure the improvements you make from deep brain stimulation stick around.

Can’t Sleep After Head Injury? How to Overcome Post-Traumatic Insomnia

Can TBI Patients Fully Recover? Tips to Boost Chances of a Higher Recovery

Is Traumatic Brain Injury Permanent? How to Help the Brain Recover