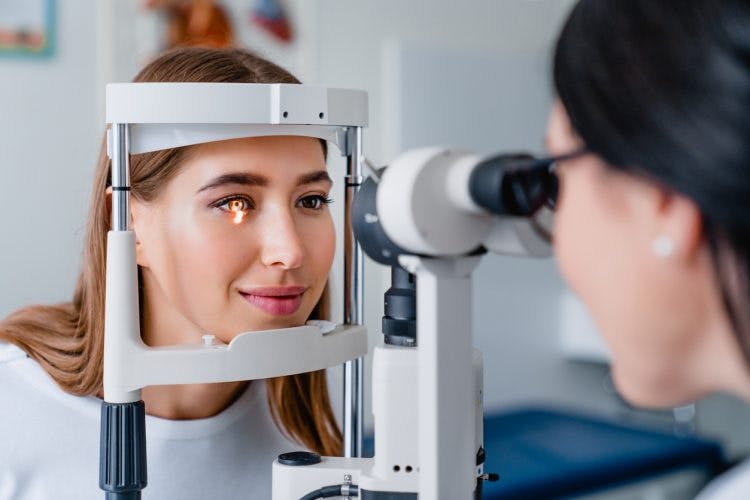 Nystagmus refers to a side effect of head injury that causes the eyes to make rapid, uncontrolled movements. It usually occurs after cerebellar damage. Vestibular disorders can also sometimes cause nystagmus.

This article will help you understand the causes and symptoms of nystagmus after a head injury. We’ll also cover some exercises that can reduce nystagmus if it is caused by inner ear problems.

Causes of Nystagmus After Head Injury

Nystagmus, also known as “dancing eyes,” causes involuntary, rapid eye movements in one or both eyes.

Damage to the inner ear can also lead to nystagmus. The inner ear is part of the vestibular system, which helps the body maintain its balance. Part of staying balanced involves keeping eye movements steady and smooth.

When the inner ear becomes damaged after a head injury, the brain can no longer tell what position the head is in. When this delicate balance system is lost, the brain does not know which position the eyes must be in. As a result, the eyes will bounce around in a seemingly random fashion.

Symptoms of Nystagmus after Head Injury

Symptoms of nystagmus mainly include fast, uncontrollable eye movements. The direction of the eye movement can look a little different in each person though. In fact, there are three main types of movement a person with nystagmus can experience after head injury:

These movements can occur in one or both eyes.

Nystagmus can also cause poor eyesight and severe dizziness, though for most people their vision is not severely affected.

Some mild forms of nystagmus after a head injury can be treated with corrective lenses or contacts. In more severe cases, certain drugs like Baclofen can help reduce nystagmus movements.

Most of these treatments are only temporary, however, and do not address the root causes of nystagmus. Therefore, the best way to eliminate nystagmus is to treat whatever underlying issues that may be triggering it.

An ophthalmologist can help you determine whether your nystagmus is caused by inner ear problems or cerebellar damage. If vestibular problems are causing your eye problems, vestibular therapy might help.

The following are a few exercises that may help improve your sense of balance and reduce nystagmus after a head injury:

A head injury can cause the crystals in your inner ear to dislodge, which can lead to severe vertigo and eye problems. The Epley maneuver was designed to move those crystals back into their proper place.

It involves moving the head into four positions and staying in each position for about thirty seconds.

The Epley maneuver must be performed by a doctor; you cannot do it on your own.

If your doctor does not know how to do the Epley Maneuver, you can find a list of certified vestibular specialists here.

The link between the inner ear and eye movement is seen most clearly in the vestibulo-ocular reflex. This is what allows your eyes to stay focused on an object even if your head is moving.

After a head injury, this reflex can become damaged, which will cause disorientation, vertigo, and in some cases, nystagmus.

Gaze stabilization exercises were designed to help restore the ocular reflex, which can help reduce nystagmus. It involves several exercises of increasing difficulty. The following is a sample exercise:

To see the most improvement, you will need to practice the exercises several times per day. That’s because the more you exercise, the more you will activate neuroplasticity, which will allow your brain to re-establish a connection to your vestibular system.

Unlike the Epley maneuver, you can do these exercises on your own, though we still recommend having a therapist help you the first time.

Here’s how to perform the Brandt-Daroff exercises:

You’ll want to do these exercises at least twice a day until your symptoms improve.

While these exercises most likely will not completely cure your nystagmus, they can help treat inner ear problems, which might at least reduce the severity of your eye movements.

Once again though, talk to an ophthalmologist about your condition before trying any of these exercises. If your nystagmus is in fact not caused by inner ear problems, vestibular therapy will not work.

Nystagmus after a head injury can cause serious vision problems and dizziness. While some cases of nystagmus will resolve on their own, most will require some form of treatment.

An ophthalmologist is the best person to diagnose you and suggest the most appropriate treatment for your nystagmus. Some of the most common treatments include corrective lenses, baclofen injections, and vestibular therapy.

With the right treatment approach, you can have a real chance of regaining control over your eye movements and improving your vision after a head injury.

We hope this article has given you a better understanding of nystagmus after head injury. Good luck!