Understanding Changes in Muscle Function After Stroke (and How to Recover) 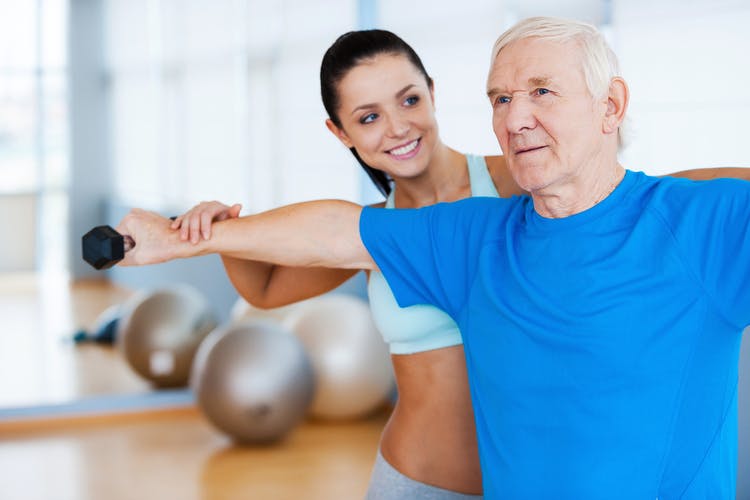 There are several different ways that a stroke can affect the muscular system. In this article, you will learn some of the most common muscle function changes that can occur after stroke and why they happen. Then, we will cover some of the best ways to treat these changes.

Use the links below to jump straight to any condition:

How Does a Stroke Affect the Muscular System?

The brain controls both involuntary and voluntary muscular activity by sending neural messages to the muscles. These messages primarily originate in the motor cortex, which is found in the frontal lobe of the brain.

The motor cortex transmits these signals to the spinal cord, where they can reach the motor neurons. When these neurons fire, the impulse travels to the specific muscle, telling the muscle to contract or relax.

In the following sections, we will discuss the most common ways that a stroke can affect the muscular system.

Changes in Muscle Function that Occur After Stroke

A stroke can have a damaging effect on a variety of muscle groups. These effects can range from mild to severe, and rehabilitation can help individuals recover movement.

The following are a few common examples of muscle function changes that can occur after a stroke:

Hypotonia refers to low or decreased muscle tone. In normal muscle function, muscles will maintain a certain level of contraction even when they’re relaxed, which is what makes up normal muscle tone and allows you to do things like sitting or standing up straight. However, with hypotonia, the muscles do not have this healthy amount of contraction and may feel flaccid or “floppy”.

Hypotonia is a separate condition from muscle weakness, although the two can co-exist, which is common after stroke. In the case of stroke, hypotonia is caused directly by the damage that has occurred in the brain.

Hypertonia refers to a high amount of muscle tone and increased tension in the muscles. It typically occurs when a stroke damages the part of the brain that sends inhibitory signals to the muscles. In normal muscle functioning, these signals instruct the muscles to relax when necessary.

As a result, the muscles continuously fire, causing extreme tension. Hypertonia typically affects the limbs after stroke. For example, if it affects a patient’s arm, it can cause it to pull in and flex towards the body. It also commonly affects the hand, causing the affected hand to clench into a fist.

If hypertonia persists for too long without intervention, contractures can develop. Contractures occur when muscle, tendon, ligament and/or skin fibers shorten and become stiff. This causes a decrease in range of motion and a restriction of function.

The most common areas that contractures can occur include the hips, elbows, knees, and shoulders, although they can occur across any joints. Sometimes, patients will develop contractures in two or more joints. Typically they occur in the areas where hypertonia is most severe.

When you stretch a muscle, its nerve activity increases. In normal muscle functioning, the increased activity triggers a contraction in the muscle fibers in order to resist the stretching. This prevents muscles from stretching too far and tearing.

This reflex is controlled by the central nervous system. Normally, the muscles and the brain communicate with each other in a constant exchange of information. This allows the brain to know when to contract the muscles and when to release them.

However, after a stroke, this communication is often disrupted, which leads to an imbalance of signals in the muscles. As a result, the muscle reflex never deactivates, and the muscles stay in a constant state of contraction/spasms. These spasms are worsened by movement, which is what distinguishes spasticity from general hypertonia.

The damage to the brain after a stroke can lead to stroke paralysis (hemiplegia) or weakness (hemiparesis).

When a stroke damages the areas of the brain that control muscle movement, the signals between the brain and the muscles can become weakened or lost. As a result, the muscles are not able to respond as well to the brain’s directions, and paralysis/weakness can set in.

Fortunately, if the connection is simply damaged but not lost completely (for example in a less severe/smaller stroke), some neural signals can still pass to the muscles. As a result, muscle activation may be significantly weaker, but still possible. This condition is known as hemiparesis.

Muscle atrophy is the deterioration of muscle tissue due to the muscles not being used. All muscles will lose strength if you do not move them regularly. For example, someone with a cast on their arm for a few weeks can lose muscle mass on that arm. This also applies after a stroke, since muscle weakness or paralysis may cause you to be unable to move certain muscles for extended periods of time.

Aside from the direct weakness that occurs to muscles after stroke, there are other reasons why you might experience muscle atrophy after stroke. Three of the most common include:

As you can see, stroke causes a number of factors that can lead to muscle loss. Therefore to reverse muscle atrophy, you will need to address these underlying causes.

How to Restore Muscle Function After Stroke Through Neuroplasticity

Neuroplasticity refers to the brain’s natural ability to reorganize nerve cells and form new neural pathways. These new pathways in turn allow healthy, undamaged portions of the brain to take over control from damaged areas.

To activate neuroplasticity, you must engage in consistent, therapeutic exercise. The more you practice an activity, such as moving your arm, the more it reinforces new neural pathways. And the more you strengthen those pathways, the stronger the connection between your brain and muscles will become.

The Benefits of Passive Range-of-Motion Exercise

Passive range-of-motion exercises are an effective way to activate neuroplasticity when it is difficult to move on your own. With this technique, a therapist moves your affected arms and legs for you. As simple as this sounds, it will significantly aid your stroke recovery.

In fact, recent research shows that passive movement activates the same parts of the brain that active movement does, especially when you are watching the movements and paying close attention to the treatment. Passive range of motion can even trigger neuroplasticity. This can reestablish communication with your brain and muscles, which can further reduce paralysis and spasticity and increase muscle function. Eventually, you might even recover enough strength to move on your own again.

In addition, passive range-of-motion exercises also keep your muscles flexible and can therefore prevent contractures from setting in. This makes it critical for preventing further loss of muscular function after stroke.

The Importance of Active Exercise at Home

The more you engage in passive exercise, the stronger the connection between your brain and muscles should become. When this connection is strong enough, you can begin to regain minimal movement in your affected limb. Once you can move a bit, you must engage in repetitive, active exercises to continue strengthening those neural pathways.

As you practice these repetitions, you can trigger substantial changes in your brain, which can help you regain further function. Therefore, if you want to recover muscle function after stroke, you must focus on high repetition.

One of the best ways to get fast results is to try Flint Rehab’s FitMi home therapy device. This device can help you accomplish the high repetition necessary to see improvement. In fact, FitMi helped a stroke survivor with arm paralysis experience twitches in his affected arm for the first time after three weeks of daily FitMi use.

Understanding How a Stroke Affects the Muscular System

A stroke can cause a wide range of problems within the muscular system, depending on its severity and location.

Fortunately, thanks to the brain’s natural neuroplasticity, it is possible to regain some muscle strength and function after stroke. The key is to engage in regular and intensive therapy. Passive range-of-motion exercises can help activate the brain as well.

With enough hard work, you can begin to see progress in your stroke recovery. Eventually, you might even overcome the effects it has had on your muscles. 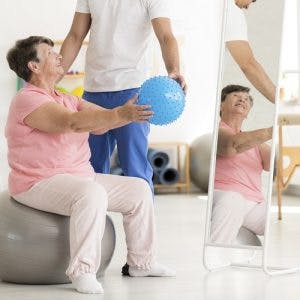 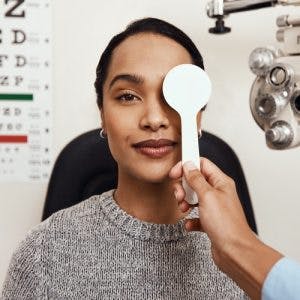 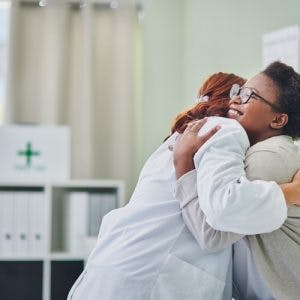 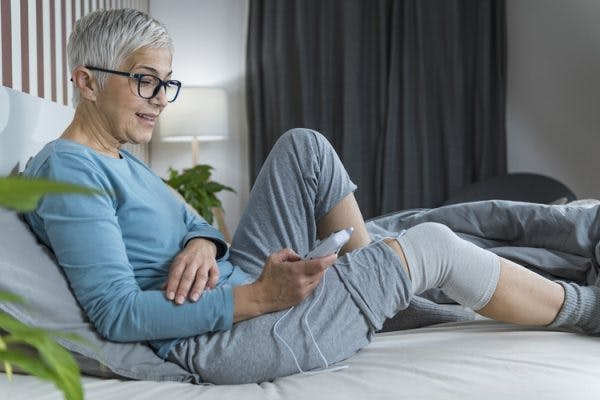 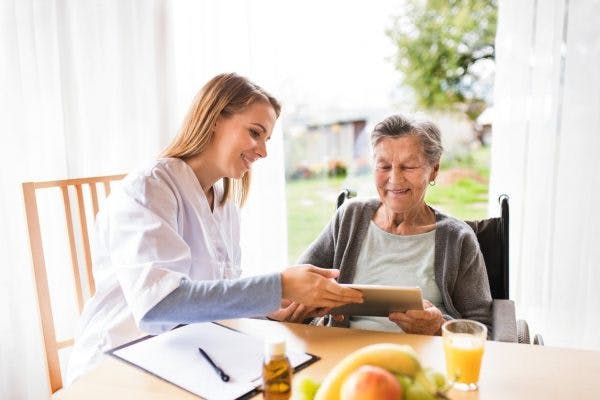